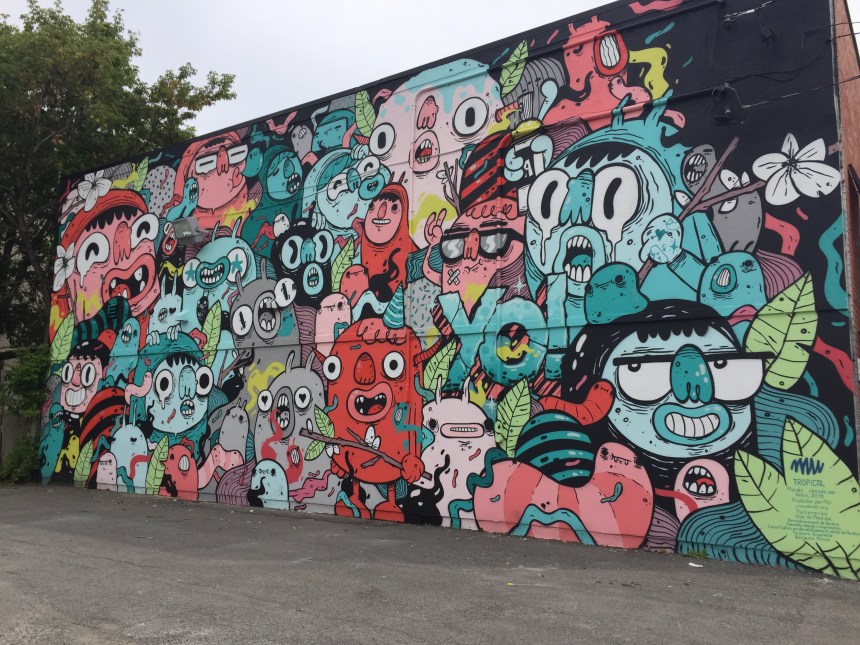 When Kathy Wolf found out a new mural was going up on Hickson Street, she became excited. She’s lived in Verdun for close to 30 years and she says her neighbourhood could definitely benefit from a splash of colour.

The final result left her a bit disappointed. Wolf feels the characters on the outdoor work of art are a little scary.

« We like the fact that we have a mural in our neighbourhood, but we would like them to be a bit more kid-friendly, » says Wolf. « I’m not here to censor art, but I would like to see it toned down a bit. »

The new mural features what could be described as cartoony monsters with sharp teeth. It’s located on the side of the Tabasko Communications building near Newmarch.

Wolf raised her concerns at the Verdun borough council meeting on September 4. She was greeted with an open ear by all members, but especially councillor Sterling Downey, a former graffiti artist.  After the meeting, other Verdun residents also expressed their disappointment. Downey agrees the borough could have done more.

« I have proposed that we have a meeting soon with the artist (« Astro »), borough officials and residents. We’ll have a discussion. We have to make sure that murals are accepted by a majority of the community, » Downey says.

He says the borough invested $15,000 in taxpayer money to help finance the project.

The MU organization oversaw the endeavour. The group was also behind the massive Leonard Cohen mural on Crescent Street.

It’s not clear if the new artwork will be modified in some fashion. It’s one of the options being considered.

Whatever is decided, Wolf says she is impressed with how the borough has come through with her neighbourhood’s demands.  She believes all proposed outdoor artwork projects in the future must be vetted by citizens.

Downey hopes he can help mediate a quick, « kid-friendly » solution that pleases everyone.

« I think my colleagues at the borough want to encourage public art. We have a lot of walls to offer, » he says.

The proposed meeting is slated to take place in the coming weeks.