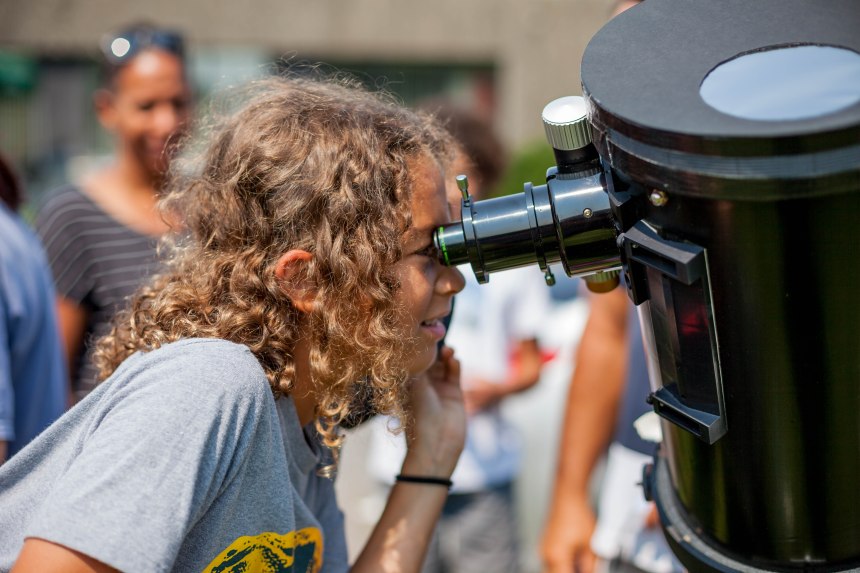 The lawns beside the Dorval Arena were packed with families building homemade shoebox viewers or setting up their telescopes equipped with special filters. Much to the surprise of the organizers of the event, the Dorval Astronomy Club, hundreds of sky watchers showed up for Monday`s partial solar eclipse. The huge turnout was way beyond expectations.

For nearly 3 hours, people were craning their necks to watch the rare celestial event that had been eagerly awaited by millions of people. The viewing started at 1:21 pm, reached the maximum coverage peak at 2:38 pm then the moon slowly moved on around 3:50 pm. Even though the sun was just a 60% partial eclipse at the apex of the event in Montreal, the sight was quite spectacular.

As there was no hint that such a huge crowd would assemble, Dorval Astronomy Club webmaster and Director Marjolaine Savoie was understandably happy but a little shocked. The club started in 1971 and Director Savoie said this event drew the largest crowd in the club`s history.

« We thought that since the Biodome and McGill and Dawson were all throwing viewing parties we would be hosting just a few locals. This is great. Our last event in July only had 10 people! » she explained.

Although they did provide several telescopes, the Club quickly ran out of the few sun viewers they had on hand. The lack ended up more positive than negative. Security did stop a man who was selling sun watching glasses at extremely high prices without a permit, but that dark spot was « eclipsed » by all the people who were sharing their sun goggles.

Resident Paola Derubeis was sitting with her family and soaking up the ambiance. « We came here at the last minute as we were heading downtown but wanted to avoid traffic. We are having a wonderful time! »
The family was actively passing around a special cardboard framed screen, each gazing at the sun for a few seconds before passing it to the next person.

The Club had also set up a live streaming laptop which was following the different states as they experienced the totality of the eclipse along its trajectory. Totality occurs when the moon completely blocks the sun from view and basically day turns to night. Cheers and gasps were heard both on the computer speakers and from the folks gathered around it.

The eclipse has been a pleasant distraction for people and a unifying event. As one junior astrologer of about seven years put it, « It’s like a party for the sun and the moon that we are all invited at! »

Quebec will be the place to be when the next solar eclipse passes overhead in April 8, 2024, when the path of totality will pass just south of Montreal. Grab your Eastern Township hotel rooms soon, there are sure to plenty of sky watchers for that event.

The Dorval Astronomy Club meet every second Monday from 8-10 pm during the summer and every Monday the rest of the year in the chalet of St-Charles Park.