A flight to remember 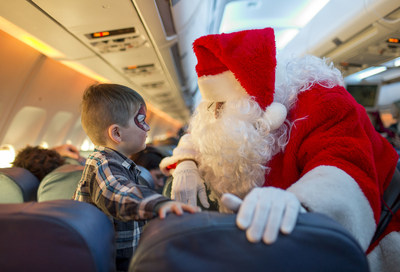 Some special children had the chance to pick up Santa Claus and bring him to Montreal during Air Transat‘s special North Pole flight last week. Later in the day, the carrier also presented a donation of $116,000 to the Children’s Wish Foundation (CWF), collected over the past year as part of the Air Transat’s Small Change, Big Hearts program and other fundraisers.

With elves, fairies and mascots welcoming them, nearly 100 children diagnosed with life-threatening illnesses met at the Air Transat check-in counter at Montreal-Trudeau Airport on December 6. After the young travelers received their boarding passes for the special flight, they made their way to the passenger lounge, where a make-up artist, a creative corner with coloring books and a photo booth were waiting for them. It was a festive atmosphere and many of the families were overwhelmed.

« It is really an amazing thing they are doing, » explained Matthieu, the father of a smiling young boy Loukian. « His Wish will happen in February when we go to Disney World, but this is really special. It is his first plane ride, » he explains.

With an excited buzz, the plane took off. During the 60-minute flight, Santa Claus made a surprise appearance and gave out hugs and presents to the wide-eyed children. Mission accomplished.

The flight was part of Transat’s annual Flights in Search of Santa in partnership with the CWF, which took place in Montreal, Toronto and Vancouver this year. The money raised brings the total amount to over $5M since 2004.

« For Air Transat, this event has become a real tradition just before the holiday season. The Santa Flight holds a special place in our employees’ hearts and in our corporate responsibility initiatives,” said President Jean-Francois Lemay.

A flight to remember

The carrier presented a donation of $116,000 to the charity, collected over the past year as part of the Air Transat’s Small Change, Big Hearts program and other fundraisers.

The program has been a successful fundraising effort. At the end of each Air Transat flight, passengers are asked to donate their pocket change. The money raised is split between the Children’s Wish Foundation and to SOS Children’s Villages, an international organization that assists abandoned children and orphans in 132 countries.