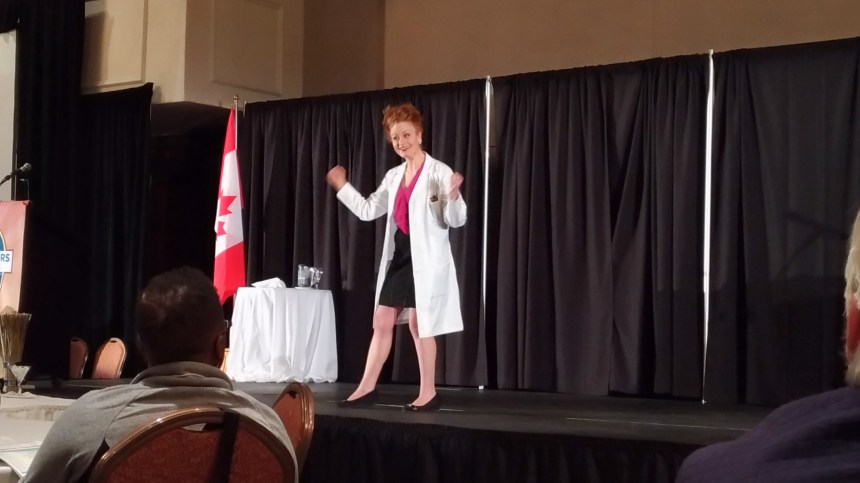 Lachine’s Nadine Champagne Gundry-White has put her career as a minister and teacher of English as a Second Language to good use. In 2015, she joined Toastmasters, the worldwide speaking and leadership skill network, and recently won their District 61 English Humorous Speech Contest.

Winning the contest is quite the feat for many reasons. At the top of the list is that District 61 is not only an officially bilingual and international District, it has more than 195 Clubs spread across eastern Ontario, Québec and northern New York State, with over 4,000 members.

The passion for performance came early to her when she came in third place in a speech contest in grade three.

« Although I’m sure I wowed audience with my Canada’s Wonderland roller coaster anecdotes, my public speaking needed some work. Mind you, I didn’t have my speech mentor back then, Italo Magni, » Gundry-White explains.

How the speech was won

For her winning entry, she dressed in a lab coat and recounted the odd differences between how men and women say words and what they actually mean by those words.

Winning the category meant strict guidelines were met. A humorous speech has to make the audience laugh, but also has to be structured with a beginning, middle and end, and not be a just a stand-up act. It had to be between 4m30s and 7m30s. If it is one second below or over, the speaker is disqualified.

« Practice is key. I wrote the speech in May and it probably took me about 70 hours total to research, write, rewrite, deliver, rewrite, redeliver and practice my speech, » Champagne Gundry-White explains. « Winning this contest is a fun reminder to not give up, but rather, to pursue your passion, » she says.

She is currently practicing clean comedy to one day host corporate functions and is thinking of applying to give a TED talk.