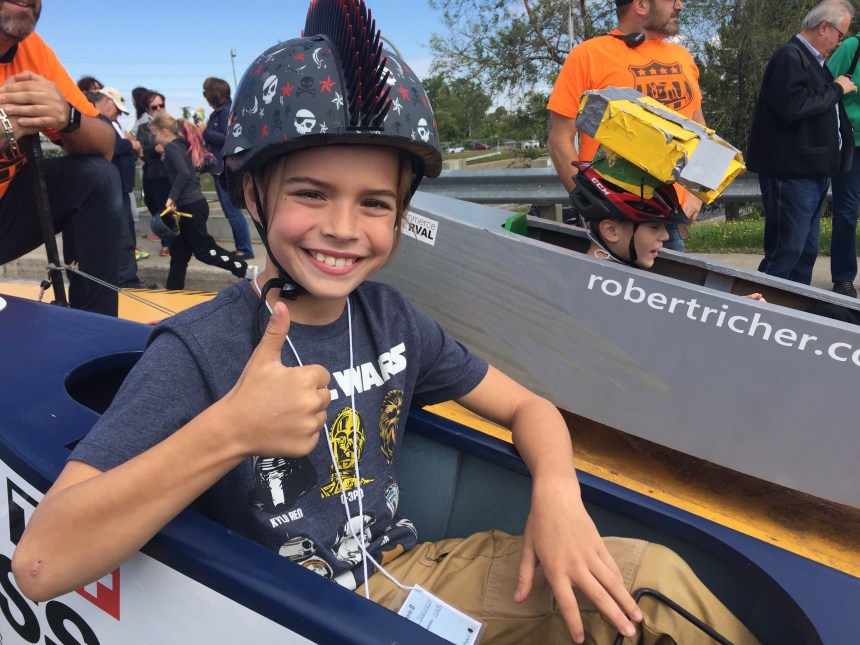 Montreal has the Formula-1, Trois-Rivières has the stock car competition and the City of Dorval is home to probably the next best-known car race in the province. Close to 60 boys and girls took part in the 39th annual Soapbox Derby.

On September 23, participants rode wooden race machines with plastic wheels down Fénelon Boulevard as dozens of spectators cheered them on.

For Leo Matte, the experience was unforgettable.

« My heart was beating so fast. There were butterflies in my stomach, » says the 8-year-old.

The colourful cars rolled off a steel ramp at the top of the Highway 20 overpass and zoomed down more than 500 feet to the bottom.

Two officers from the Montreal Police department were on-hand taking part in the fun, recording the speed with their radar guns.

« I think the fastest we’ve ever recorded was 31 kilometres an hour. That’s pretty fast for a soapbox, » says Derby President Charles Aubry.

The event was open to children aged 7 to 12 and there was no charge to participants. The soapboxes, the race track equipment and the food and drinks on-site were courtesy of the City of Dorval and Commerce Dorval, a business association that promotes local merchants.

« It was a perfect day. The sun was out. Everyone had a great time, » says Béatrice Cuzzi, Project Manager for Commerce Dorval.

Prizes were awarded to racers with the fastest recorded times and to those who arrived with the silliest decorated helmets. Lara Brunet attached more than 100 flowers to her headgear.

Plans are already underway for the 40th edition of the race next September. Aubry says the event definitely brings out the community spirit.