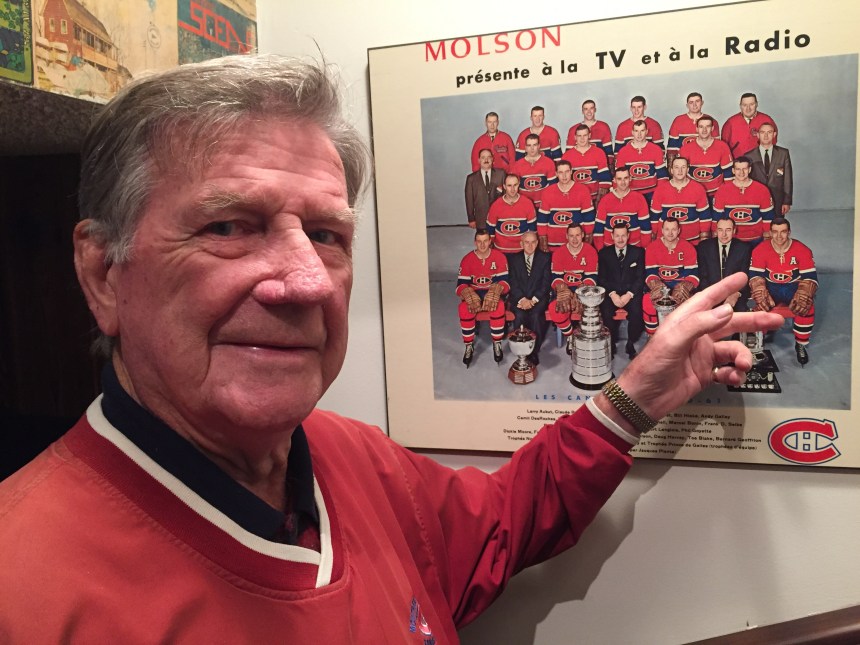 Former Montreal Canadiens player Phil Goyette always likes to joke about his age. Ask him the question and he’ll answer « 58 » with a smile and a wink.  Goyette turned 85 on October 31. For the Habs legend, age is just a number.

Goyette is a very active senior citizen. He exercises every day, plays golf on a regular basis and maintains his home in Lachine year-round.  For Goyette, home is where the heart is.  His basement has been converted into a sort-of hockey museum.  The space is filled with precious souvenirs from his playing days.

The hockey center spent 16 seasons in the NHL with the Montreal Canadiens, New York Rangers, Buffalo Sabres and St-Louis Blues.  He retired in 1972.

« They’re mementos from my lifetime.  They’re fond memories. It was my late wife’s idea to put it all up on the walls. There is so much stuff. I don’t know what’s up anymore. I want to keep them as long as I can, » says Goyette.

There are dozens of photographs, buttons, ticket stubs and, of course, trophies.  In one glass case, you’ll find a replica of one of the four Stanley Cups he won with the Canadiens (1957 to 1960) and an imitation of the 1969-70 Lady Byng Memorial Trophy, which is awarded to the player who exhibits sportsmanship and gentlemanly conduct on the ice.

« Back then, you would even get a small trophy when you scored a hat trick. It’s not like that anymore, » says Goyette.

He has no favourite piece in his collection because they are all “precious” to him.

For now, it’s all staying put.  He has no plans to share a portion of the souvenirs with a local museum. He prefers to just show it off to his family when they visit.  He has seven grandchildren and three great-grandchildren.

Goyette’s love affair with his hometown of Lachine is also undeniable.  He’s lived in the borough for most of his life. He grew up on 1st Avenue and played minor hockey in « church leagues ».  Shortly after beginning his NHL career, he moved into his current home in 1962 with his wife and three children.

For Goyette, staying in Lachine was a no-brainer. « It’s a nice town.  It’s well-kept.  It’s close to Montreal and close to the West Island where some of my family lives today. Why should I move or downsize?  No thank you.  I am very happy here, » he says.

The Habs legend says he has it all: family, health and great memories.  He hopes to be around to enjoy it all for at least another 20 years.