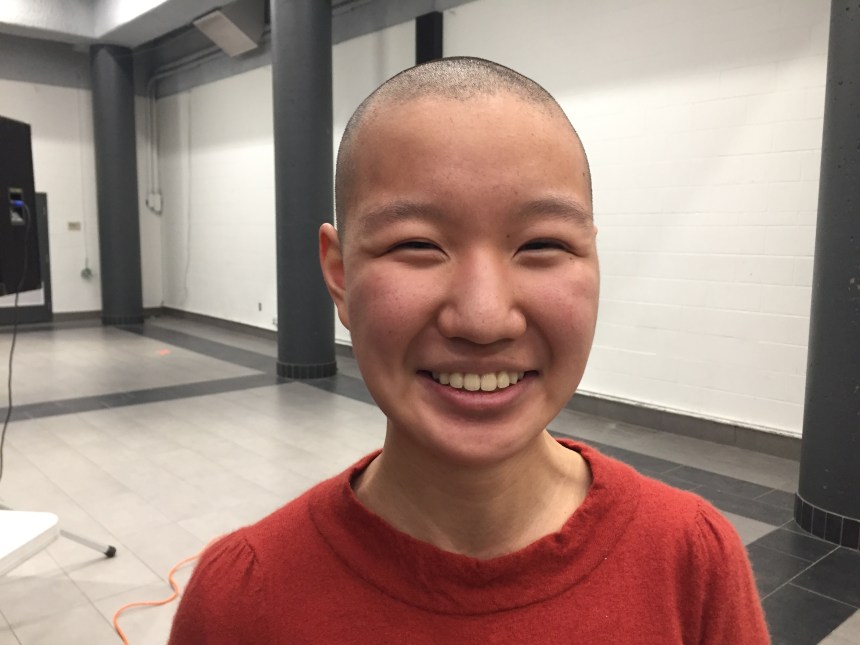 Each week, John Abbott College student Xinlan Yu goes to great lengths to help children living with cancer. She travels from her Dorval home to west-end Montreal and volunteers her time at the Children’s Hospital.  Last week, the cegep student decided to donate something else – her hair.

Yu took part in the Leucan Shaved Head Challenge at her school on February 11th. She was one of about ten students who decided to go bald to show solidarity with young cancer patients across Quebec. Chemotherapy, often used to treat the disease, causes patients to lose their hair.

“It’s important to show them that they are not alone. When I am in the hospital, I see them, they are very weak. Some are so weak that they can’t have any visitors. This is what motivated me to do this,” the 20-year-old says.

As part of the challenge, participants were asked to raise money for Leucan, a non-profit group that provides services like massages, weekend excursions and financial aid to families of cancer patients.  Yu raised $400.

“When I was fundraising at the shopping mall, at least five people came up to me and told me not to do it. They said I had long lovely hair. That didn’t stop me,” she says with a smile.

The Shaved Head Challenge is a major fundraiser for Leucan.  Since it began in 2001, the organization has raised more than five million dollars through this event. More than 90 thousand people have shaved their locks for the cause.

“There are a lot of families in the province that need the help. They need support and a break from everything that is going in their lives,” says Laetitia Viard, Senior Project Manager at Leucan.

Approximately 300 children are diagnosed with a form of cancer each year in Quebec – an average of about one per day.

“Each Shaved Head Challenge is just so inspirational for everyone involved,” Viard adds.

Yu says she felt like “Superman” after completing her challenge.  She says there is no question she will do it again – but not next year.

“It felt so empowering. I will definitely do it a second time but I want to grow out my hair first. Maybe in two years,” she says.

For now, Yu is looking forward to her next trip to the Children’s Hospital and showing off her new look.  She can’t wait to tell the young boys and girls all about her experience.