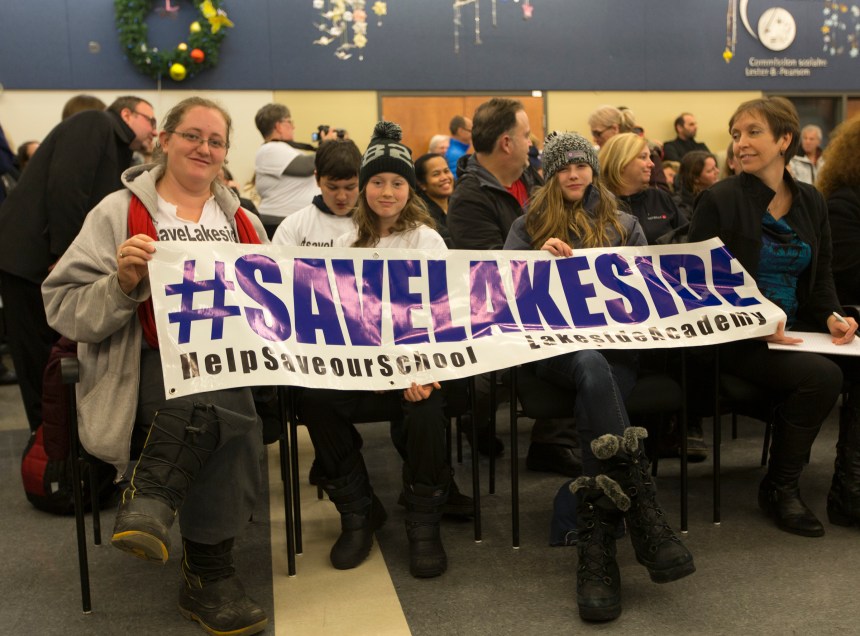 Cheers and even some tears filled the Lester B. Pearson School Board (LBPSB) meeting room Monday night when, in a momentous decision, commissioners voted nine-to-four in favour of postponing the closure of Lakeside Academy for one year.

Around 200 supporters, some donning white #SaveLakeside shirts and banners, turned out to witness the decision.

For over a month, the Lachine and Dorval communities have been rallying to save Lakeside Academy, the territory’s only English high school. The #SaveLakeside movement began almost immediately after the school board voted for it for closure on Dec. 14. A petition supporting the school gained over 10,000 signatures in 10 days.

To stay open permanently, the academy will have to show that they can attract more students, explained LBPSB chair, Suanne Stein Day, who voted against.

“Can we do it by bringing in indigenous students, merging pilot programs with the French school boards, we’d love to attempt any of those things,” said Stein Day, who was impressed with the community support for their school.

She also cautioned that, after all the hard work, this postponement was just the beginning—something Lakeside supporters are ready for.

“Now we have huge responsibility on our shoulders to create a viable model,” said Lachine councillor Maja Vodanovic. She hopes the provincial government will pay for a committee focused on structural changes from the school boards.

Amidst congratulations, hugs and handshakes, Jennifer Park, who spearheaded the #SaveLakeside movement (who also has two children at the school) said she was feeling, in one word, “Awesome.”

Grateful to the board for giving the school a second chance, Park said she is ready to promote the school in an effort to get attendance up. “A lot of people didn’t know Lakeside existed, so it’s comforting to know that a lot of parents are interested in the school.”

Park never doubted the outcome of the meeting. “When people stand together . . . and realise it’s time for change, then things can happen.”

Joshua Arless, a LBPSB commissioner and Lakeside graduate, said he didn’t believe the resolution would pass until it did. “You never roll over and think it’s going to be okay . . . Just keep transferring the relevant information.” Arless is also in favour of change. “It’s time to open a dialogue with other organisations,” he said.

The motion for reconsideration was brought forth by commissioner Eric Bender, who felt that a “deaf ear” should not be turned to the long list of reasons provided to the board.

The school’s International Baccalaureate program, resolutions from Lachine and Dorval in support of the school, political support at municipal, provincial and federal levels, potential collaboration with the Commision Scolaire Marguerite Bourgeoys and First Nations Band Council, as well as the documentation provided by Lakeside being “excellently done,” were among the reasons cited.