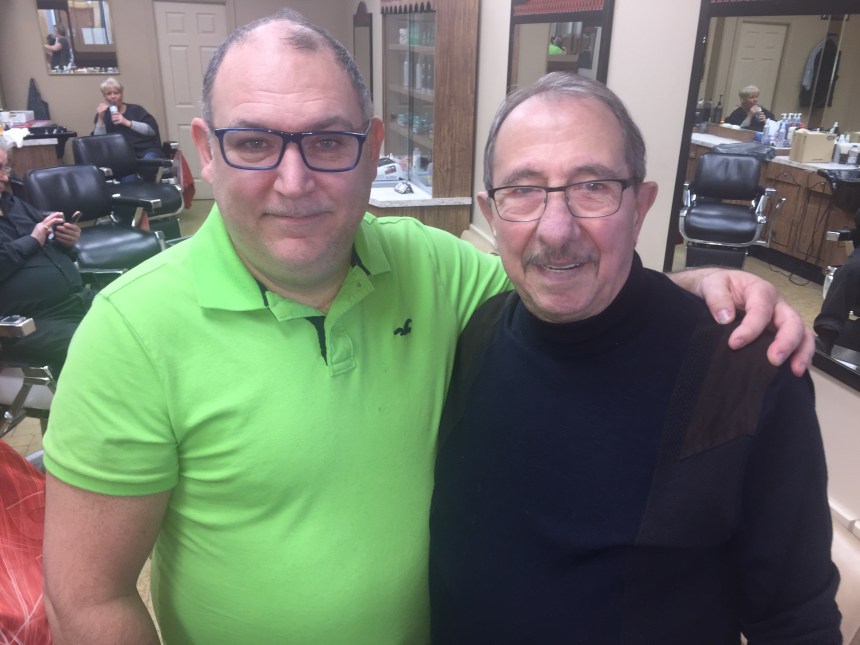 Joe Persechino is the owner of LaVilla Barbershop, on Dollard Avenue. A few years ago, he gave up a steady job and a regular paycheque working as a plumber to continue his father’s tradition following his retirement.

At first, trading in a toolbox for a pair of scissors was a bit of a challenge, the 48-year-old admits. Now, Persechino is glad he did.

« For me, it feels good that I did something to make my father happy, to make him proud.  It’s rewarding and gratifying, » Persechino says.

Tony Persechino is genuinely impressed with how quickly his son has picked up the trade.

« I tell my friends that my son works like me and, you know what, he’s actually better than me! He’s a very good barber. I’m very happy, » the 74-year-old says with a chuckle.

That gives a warm feeling to Joe.

Tony Persechino worked as a barber for more than 55 years. He began cutting hair at the age of 14 in the Italian region of Lazio and continued the trade when his family emigrated to Montreal in the 1960’s.

He started working at LaVilla Barbershop when it opened for business in 1972.  He became the owner eight years later.

The elder Persechino hung up his scissors partially due to health reasons.  He was recently diagnosed with a cancerous tumour in his lungs. His condition has improved in recent months.

The barbershop will mark 50 years in business in 2022. The Persechino family is not planning anything special, but they will mark the silver anniversary by « modernizing » their quaint shop inside the Place Newman mall.

« We’ll probably get some new barber chairs and we’ll freshen it up a little bit.  Nothing flashy.  We want to remain that clean, simple place to get your hair cut quickly, » says Persechino.

He will not compete with modern barbershops and invest in a fancy espresso machine or a large television screen. He will only promise lollipops for the children. The bowl of colourful candies next to the cash register will always remain a fixture here.