So Ezra Levant owes these seven migrant men an apology 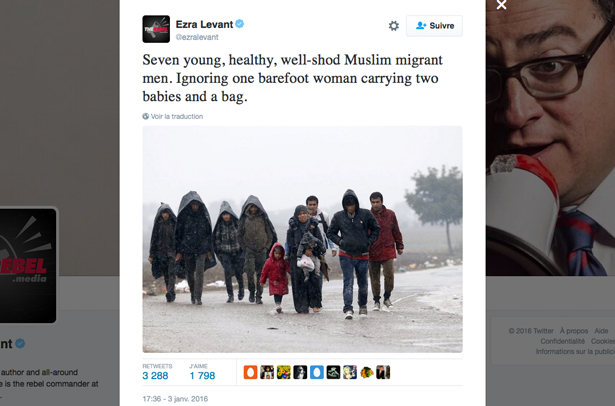 Hi there! If you’re reading this in English, we’ve probably never met. My name is Jeff Yates, I’m a journalist with Métro newspaper in Montreal, and I run a blog on the paper’s website called Inspecteur viral («the viral inspector» – okay, it sounds cooler in French) where we fact-check (okay, debunk) viral crap on the internet.

The intention seems clear: Muslim migrants are bad because they don’t help out women with kids.

He isn’t alone. A French-language chain email was sent to me by a reader, where it says that the photo is proof that women are slaves in Muslim culture, and that Muslim migrants will therefore never be able to conform to Canadian values and traditions (more on that later).

Hmmm, that’s funny (no, it really isn’t), but everyone is making some pretty broad assumptions here, since (before today, that is) we knew very little about the photo.

Here’s the Associated Press caption that accompanied it:

«A group of migrants walk on the road near a border line between Serbia and Croatia, near the village of Berkasovo, Serbia, Monday, Oct. 19, 2015. Tension was building among thousands of migrants as they remained stranded in fog and cold weather in the Balkans on Sunday in their quest to reach a better life in Western Europe, two days after Hungary closed its border with Croatia and the flow of people was redirected to a much slower route via Slovenia. (AP Photo/Darko Vojinovic)»

That’s… all there is.

Notice that there’s no mention of these migrants being muslim, of the people in the photograph knowing each other or of the men purposefully not helping out the woman.

Thankfully, there exists this thing called «journalism». We therefore don’t need to make uninformed assumptions about a photograph; we can actually talk to people who were there that day when the picture was taken and ask them about what was going on.

Tracking down that woman would probably be next to impossible, but we can do the next best thing: we can get in touch with the serbian photographer who snapped the pic, Darko Vojinovic, who was there that day (d’uh) and who is a much better source than Mr. Levant to tell us what was going on.

After a few days and a few emails (yeah, journalism takes a lot more effort than making a story up and tweeting about it), the AP forwarded us an email from Mr. Vojinovic. Here it is (his words are in black):

So to recap: the men probably didn’t know the woman, and possibly didn’t even speak her language. They passed her by on the street while walking to a checkpoint and didn’t offer to help her out with her kids. Also, according to the photographer, in these difficult conditions migrants from different countries tend to stay away from each other and mind their own business.

Here’s a question for men: how often do you stop women you don’t know on the street to offer to help them out with their children?

Here’s a question for moms: how often do you ask complete strangers to help you carry your kids?

In fact, we decided to try a little experiment. We asked one of Métro’s photographers to snap a picture if she saw, during the normal course of her day, a woman carrying children and Montrealers not helping her out.

It took all of an entire hour for her to send us this:

«Three healthy Montrealers in a subway station. Ignoring a woman carrying a baby and a shopping bag.»

This is not a rare thing. Mothers tend not to pass off their babies to total strangers on the street, no matter how encumbered they are! It’s common sense!

It’s so easy to just lump people together and judge them as a group. In this case, people automatically assumed that migrants are «one people», all know each other, and should therefore help each other out. But when they see a photo of Montrealers ignoring a woman with a baby, they understand that the people in the photo are probably strangers, and that it’s natural that they’re not interacting.

To sum up: Mr. Levant’s interpretation of this photo was based on uninformed assumptions, and this photograph shows nothing sinister (well, except for the migrants fleeing for their lives part).

It was nice to meet you, this was fun, we should do it again sometime! 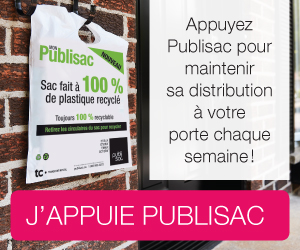