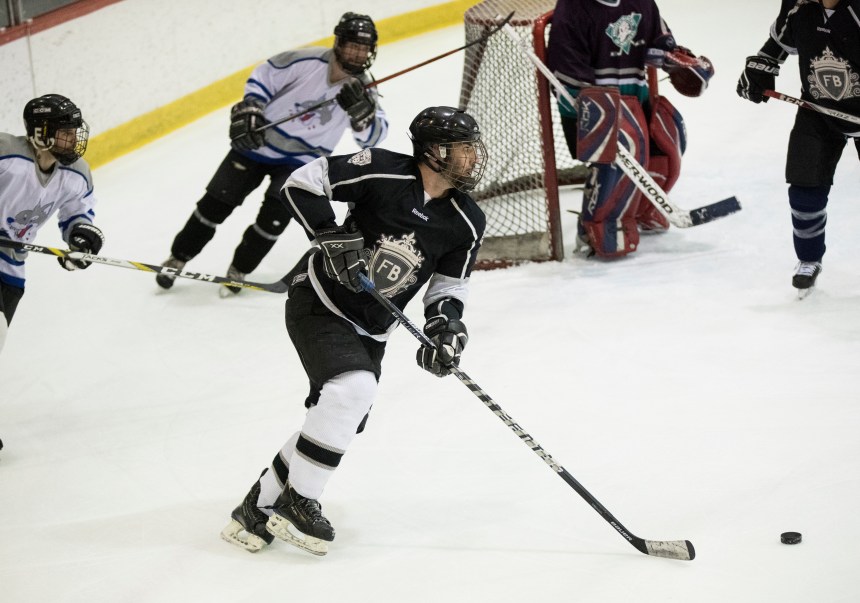 About twenty off-duty police officers laced up skates and pads to see if their skills could line up against the hockey squad of LaSalle Community Comprehensive High School (LCCHS) teachers. The police station’s new commandant organized the game in the Jacques-Lemaire arena as part of an ongoing outreach strategy.

As part of their overall effort to strengthen community connections, the Service de Police de la Ville de Montréal (SPVM) of LaSalle PDQ 13 make regular visits to local schools and institutions. This is also done for the officers to become familiar with the layout of public facilities in case of emergency.

During one such visit to the LCCHS, Officer Gabriel Duguay noticed there was a star in the building. It was teacher’s assistant Cassandra Poudrier, also the defensive stalwart of the Canadiennes de Montreal professional women’s hockey team. Few weeks after their conversation, the game was being played.

« Each PDQ has to come up with a community event. A lot of us play hockey and we figured the kids might enjoy watching. It is a way to relate on a human level, » explains Officer Kenny Robitaille, who cheered on the police team.

This game follows the first « Coffee with the Cops » event which took place earlier in January in the McDonald’s on Champlain Boulevard to break the ice and perceived barriers.

LCCHS Principal Jennifer Kurta thinks that the idea makes for better communications between students and the police. For her, the stigma of talking to police can be eased with more events like the hockey game.

« We used to have volleyball games years ago. It’s nice to start something again, » she says.

On the ice, the action was pretty intense. Some checking, some nice passes and goals led to an entertaining game. The police had about a dozen fans, but they were heavily outnumbered by the school kids and staff. Although some of the kids were cheering against their teachers.

« The teachers look a little more organized, but I guess I go for the cops, » said Nick, a student enjoying the game from the seats.

But in the end, the teachers prevailed in a shootout 8 to 7.

Social outreach officer Rachel Desmarais is pleased with the event’s success. « We usually see these kids when something has gone wrong and we must intervene. It is a great way for them to see us in a different light, » she says.

The police will be continuing their outreach program with the second of five planned « Coffee with a Cop » mornings at the Champlain Blvd. Tim Hortons on February 14.