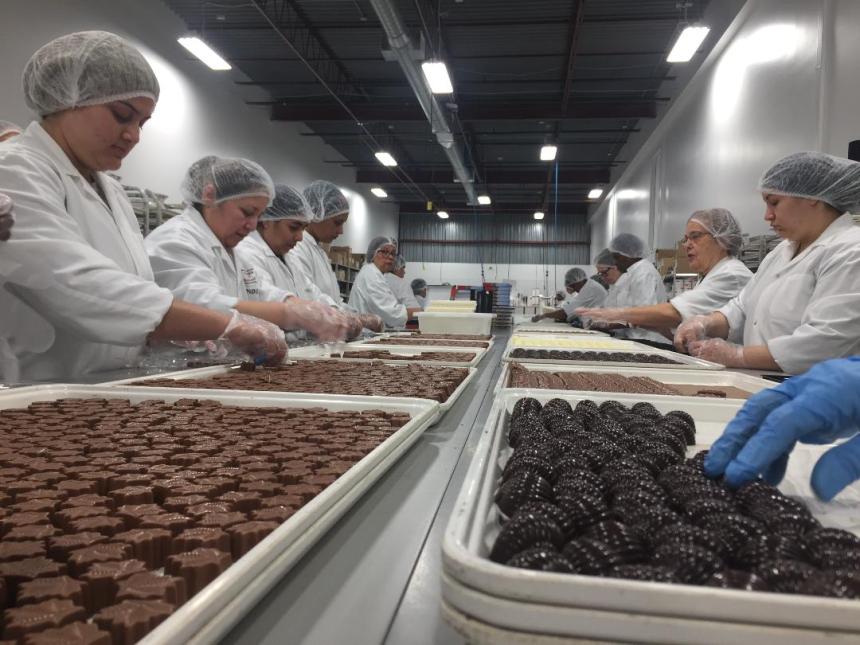 When you think of countries known for  producing quality chocolate, Switzerland and Belgium immediately come to mind.  They are home to well-known brands Lindt, Godiva and Leonidas.  A company based in Saint-Laurent says their sweet product also deserves to be on that prestigious list.

Galerie Au Chocolat is not a household name, but it’s one of Canada’s top producers of premium, higher-end chocolate. Headquartered near Trudeau International Airport,  the company churns out more than a thousand tonnes of chocolate each year.

“That’s a lot, but we want to significantly boost production. We want to become one of the market leaders of quality chocolate in all of North America,” says company president Noah Pinsky.

He hopes to grow his company’s revenues about 20 per cent per year over the next five to ten years.

Galerie Au Chocolat has the space to expand. Last June, the company moved into a new 45,000 square foot plant on Cote-de-Liesse Boulevard.  Their new digs are almost three times the size of their old plant on Henri-Bourassa Boulevard.

More than 40 workers prepare and box the chocolate six days a week.

“We have brought in some key staff to help us get to the next step.  We’re really focused on sales.  We think we can produce something good that is affordable,” he says.

The 39-year-old businessman can taste success, but he admits he knew very little about the chocolate business growing up. Six years ago, Pinsky was in the finance world.  He held a steady position with the Royal Bank of Canada.  He wore a suit and tie to work every day.

At age 33, he gave it all up and jumped on an opportunity to invest in the company in 2013.  He poured his life savings into the venture.

“Let’s just say my parents were not very supportive of the move,” he says with a smile.

About half of the chocolate produced by Galerie Au Chocolat carries the company’s logo.  The other half is done for private labels.  Pinsky keeps his clients’ names close to the chest.  He does not want to reveal who his biggest customers are but he says most of the higher-end chocolate bars sold in Canadian airports is produced at his factory.

“We produce chocolate for adults. We don’t produce the stuff sold in pharmacies or dollar stores for children. Look, everybody is going towards cheap, and that’s fine. But that’s not what we’re about. There is a niche market for very good chocolate.” he says.

Pinsky says he wants to only produce chocolate that people will be proud to give their guests.