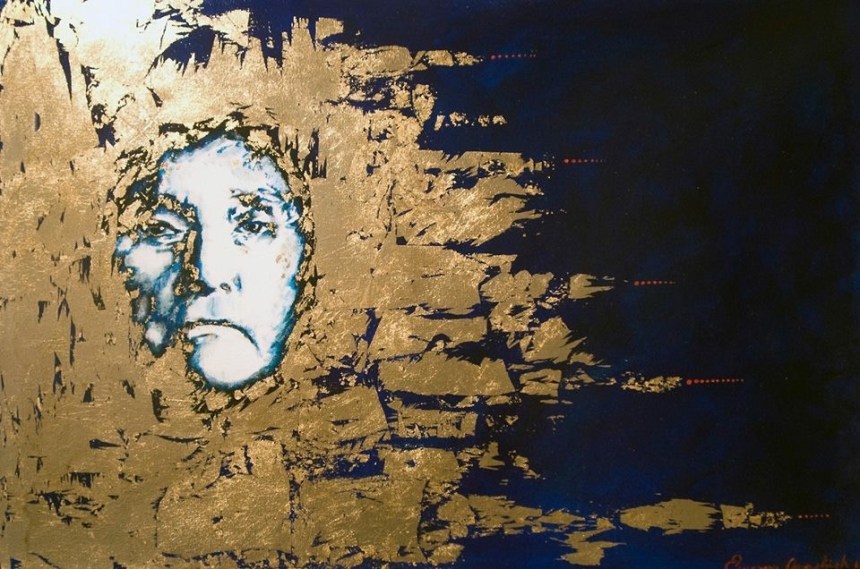 Beyond viewing a painting, residents in Lachine will have the chance to engage with the work of First Nations artist, Eruoma Awashish, in an uncommon way on March 6 and 13.

“Art is strong language. Art becomes a space where dialogue can be born without prejudice. I think my art can help to better understand who we are as First Nations people,” said Awashish, whose exhibit, Reliques et passages at l’Entrepôt in Lachine opened on Feb. 26.

In an effort to build bridges between native and non-native communities, residents are invited to participate in a dialogic session on the artist’s work, over the next two Sundays. The method, developed by Professor Norman Cornett, lets the audience absorb the art in six steps: observation, thought, stream of consciousness, feeling, hearing and naming, facilitated by the professor on March 6.

The exercise aims to demythologize native culture and spirituality by creating a safe environment for dialogue. “All we care is that they give us an honest answer. What you experience as you look at this art. Write it down,” said Cornett, who believes that the only wrong question is an unasked question.

Sunday, March 13, Awashish will be present to dialogue with participants when Cornett reads the anonymous observations.

The native demographic is Canada’s fastest-growing segment of the population. “We beat around the bush of political correctness. We’re afraid to step on toes, so we don’t speak our mind. We don’t give an honest answer. But until we give an honest answer we can’t really dialogue between natives and non-natives,” he explained.

For Awashish, the opportunity is a unique chance to hear people make sense of her work, but also to spread knowledge. “I think ignorance is our biggest enemy. Our challenge is more to learn about who we are and be compassionate. This is the challenge of humanity,” she said.

Awashish is inspired to make her art, that often contrasts recovered hunting materials like bones and feathers with industrial, by her identity and spirituality. “The wounds heal slowly. Spirituality helps us to transcend our suffering to become stronger beings. We must take our place in that territory and for that you need to heal and remember who we are.”

Cornett devoted his life’s work to exploring differences in cultures after experiencing segregation between blacks and whites first hand, growing up in Texas in the 1950s. “Separate but equal was the euphemism they used until I was much older. It’s apartheid by another name,” he explained. “As a child I kept asking myself why.”

The dialogic sessions take place March 6 and 13 from 3 to 5 p.m. at l’Entrepôt, 2901, boulevard Saint-Joseph. For more information contact Cornett through his site at haveyouexperienced.wordpress.com Reliques et passages is open Friday – Sunday until April 3. Entrance is free.