Much ado about theatre in the Park 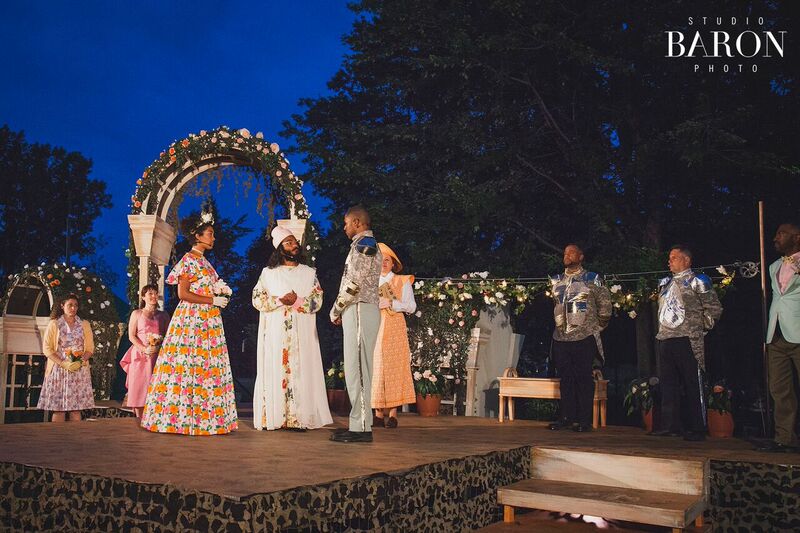 As long as the sun is shining, Repercussion Theatre’s production of the Shakespeare play Much Ado About Nothing will be performed in Philippe-Laheurte Park on Friday, August 4. Saint Laurent is one of the 29 total shows in the tour this summer. Crowd reactions have been positive so far, especially from kids.

This year’s production stars both established and new actors. The story revolves around the romances of two couples, Claudio (Dakota Jamal Wellman) and Hero (Tiernan Cornford) and the second couple Benedick (Quincy Armorer) and Beatrice (Holly Gauthier-Frankel), but it is the sub-plots filled with infidelity, deception and mistaken identity that have made it Shakespeare’s most frequently performed comedy.

Director and Repercussion boss Amanda Kellock enjoys Much Ado. “A lot of the play is about gender norms and stereotypes and the restrictions that are put on us because of gender,” she explains.

The West Island native has made some interesting creative choices for this incarnation, including not setting a specific time period for the play as some directors are inclined to do. And for those concerned about « thus, `ere and wherforeartthous« , this Shakespearian comedy is mainly prose and easy on the ears.

The stages within a park showcase the talent, skill and experience of the artists. Thus, designers have to build a set that seamlessly blends in with the trees and grounds that host the show.

« Contending with the fretful elements »

The excitement is building as the Shakespeare in the Park has been coming to Saint-Laurent parks since 2011 and the play is something that the residents look forward to.  « The evenings are very family friendly and atmosphere is very relaxed. People with young kids tend to sit at the back so they can leave if the they get restless, or go play in the park with them, » says Barbara Ford, Repercussion’s Publicist.

The unpredictable weather has been an issue, though. « It is always a challenge, but SITP crowds are an intrepid lot, sitting with umbrellas, or bringing extra blankets to stay warm if the weather turns cool. »

Repercussion is, for the second year, offering all of the SITP communities a chance to use a smart phone app with French translations provided by Plank Design to allow Francophone audiences to follow the text.

For 29 years Montreal’s Repercussion Theatre has been known for its annual Shakespeare-in-the-Park summer tour. To celebrate their 30th  anniversary, they will be commissioning two brand new works during the 2018 season.

A new play written by Erin Shields will focus on the women of the Bard and ponder what they might have said if given a soliloquy or two. “I’m thrilled to have the opportunity to delve into Shakespeare’s worlds and characters to create a new play that will speak to Montréal audiences today. » The playwright explains. Alumnus Jeff Ho will explore Shakespearean text as a tool for teaching English to recent immigrants in Montreal.

The two projects will be added to the 2018 Shakespeare-in-the-Park tour.