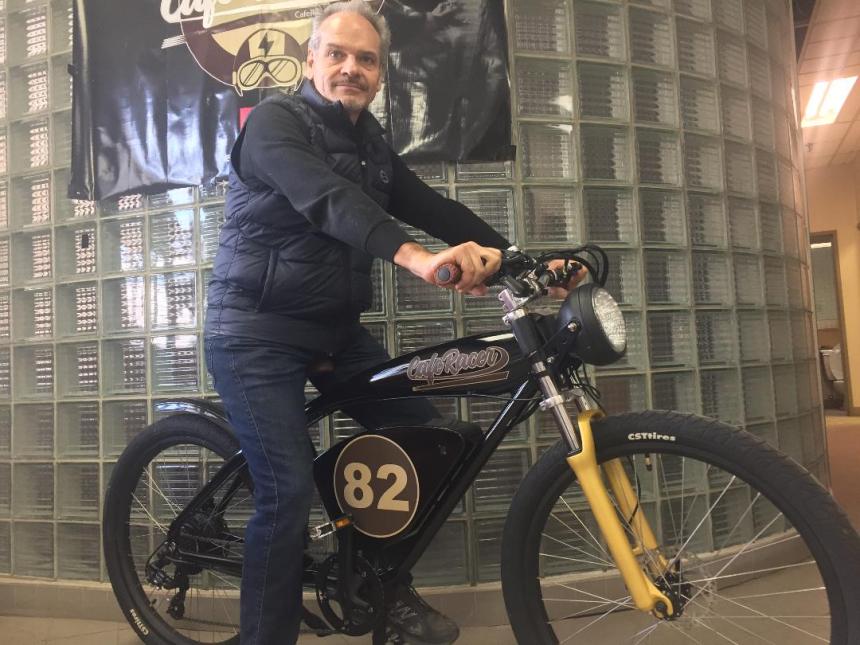 In 2016, Daniel Sadan joined the electric movement. The 60-year-old entrepreneur began investing a chunk of his life savings, and his free time, designing a luxury electric bike out of a building on Marcel-Laurin Boulevard.  Three years later, the gamble appears to have paid off.

Sadan is considered the top producer of e-bikes in Quebec. What sets his Made-In-Saint-Laurent electric bike from his competition is its vintage look.  Sadan’s bicycles resemble motorcycles from the 1960’s. But that’s where the comparisons end.

“Yeah, it looks like a motorcycle but riding a motorcycle, as everybody knows, is a dangerous proposition. The nice thing about my bikes is that you can ride them on bike paths in Montreal. You can’t do that with motorcycles,” Sadan says.

He adds that electric bikes don’t need to be registered in Quebec.

While Sadan touts the advantages of this environmentally-friendly way of travel for Quebecers, he admits most of his clients are based outside of La Belle Province.

The Café Racer E-Bike has become a big seller in parts of Europe and the Caribbean. Some boutique hotels in the Bahamas have invested in them.  They are offered to vacationers for excursions.

“It’s often professionals who buy these bicycles. They buy for use at their country homes. Some others have recreational vehicles and they take them with them when they go out camping,” he says.

By law, power-assisted bicycles in Quebec can only travel at a maximum speed of 32 kilometres an hour.  On a single charge, the Café Racer E-Bike allows riders to travel a total distance of about 90 kilometres.

“Charging this bike is like charging a razor. It’s easy. It’s done in about four hours,” Sadan says.

And like most electric bikes, Sadan’s bike allows users to “switch on the fly” and ride it like a normal bike.

Last summer, the popular bike-sharing service BIXI introduced 40 electric bikes across its network as part of a pilot project that ran from August to November.  The company is currently evaluating comments from users.

Sadan hopes they become a permanent fixture. He believes it will help create some buzz for electric bikes and that will help with sales of his product. He is set to expand his Saint-Laurent facility and hire more personnel.  Currently, he has 12 designers and mechanics on staff.

“The outlook is positive. This is the future. We can embrace it or ignore it, but the electric age of mobility is here,” says Sadan.

Sadan already created some of that buzz last month at the Montreal International Car Show.  He sold half-a-dozen bicycles and convinced many others to at least think about riding a “green machine”.