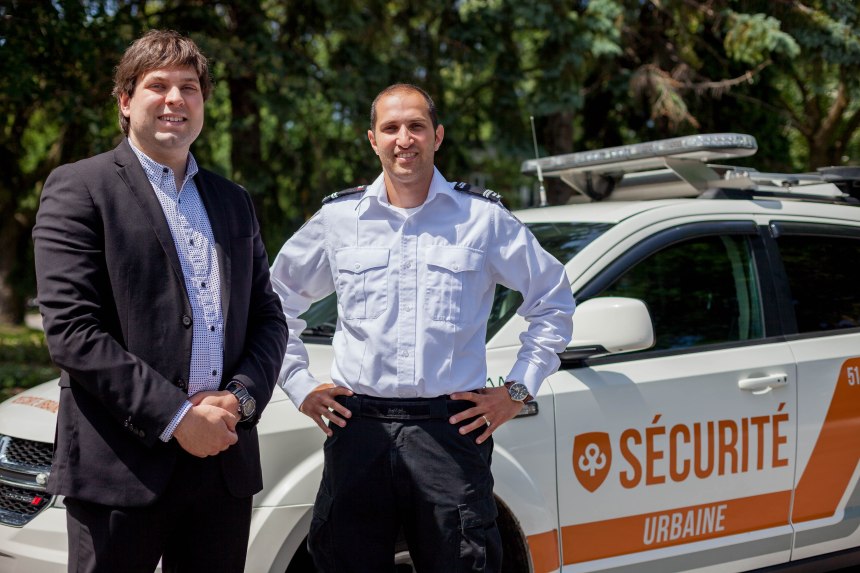 The patrol car in the parking lot of the Saint-Laurent borough hall is not a city police car; it’s part of the urban security patrol. Established in 2007, it collaborates with the Service de police de la Ville de Montréal (SPVM) to respond to residents’ concerns, intervene in minor incidents and provide security at major public events in the borough.

Private security company Garda World oversees the patrol since April. “There are several boroughs in the city which offer a service like this, which complements the police,” says Robin Fiola, head of urban security in Saint-Laurent. “We’re here to reinforce residents’ sense of security and support existing city services, including the police, the fire department and public works.”

Fifteen officers currently serve on the patrol, which has four cars and two bicycles at its disposal. Many are graduates of police technology programs, others are career private security officers. All have received mandatory training from the Bureau de la sécurité publique as well as an additional 40 hours of training in working with the public. They are also trained in first aid, CPR, and de-escalation and can intervene in emergency situations before the arrival of police, firefighters or paramedics.

Officers’ mandate is not the same as that of police, explains Lt. Ilyas Hazzam, the senior officer in the patrol corps, who has worked with the patrol since 2009. “We don’t respond to urgent calls, we don’t make arrests and we don’t have the same power to demand identification that a police officer has,” he says.

Observation
Much of the patrol’s daily work involves staying up-to-date on the day-to-day affairs of the borough, responding to minor traffic accidents and asking people to leave public parks after 11 p.m.

“The first thing patrol members do when they get to work is get all the information they can about what’s going on in the borough,” says Hazzam, who lived in the borough of Saint-Laurent until recently.

Just over half of a patrol member’s workload comes from things he or she observes while on patrol, the rest is in response to calls from residents. Fiola says patrol members intervene wherever they see problems — “whether it’s a fallen tree branch, an electrical line down or a disabled vehicle.”

“Our role is to make sure the area is safe and refer the incident to the appropriate services,” says Fiola. Outside of emergency situations, Fiola and Hazzam would like residents to see the patrol as a service that provides information and addresses problems that can seem minor but have a major impact, such as faulty lighting.

“Our role is not to intimidate people. We want to be there for people and answer their questions about public safety as a complement to other public services,” says Hazzam.

Residents can report an incident by calling 514 855-5700 at any time, and can learn more about the role of the patrol by calling 311 or contacting the borough hall directly.