Revitalizing the Royal Alexandra in Lachine 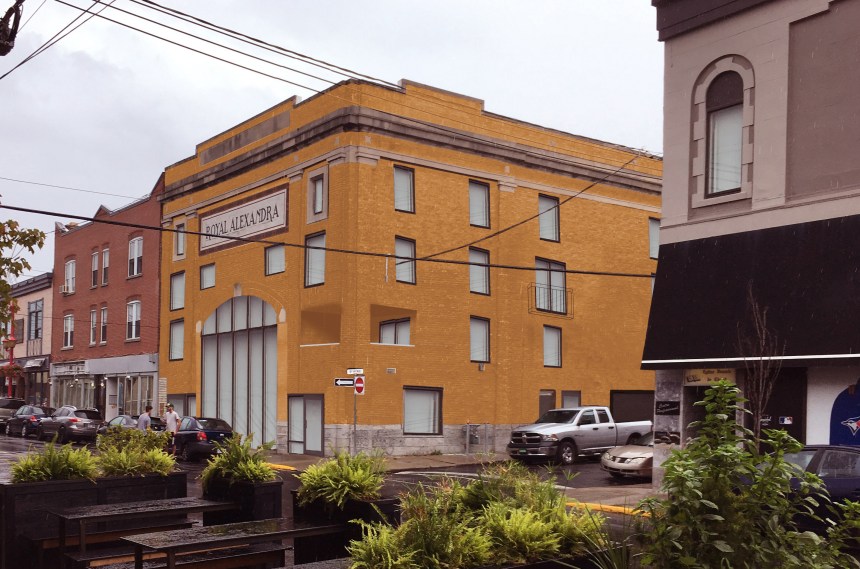 A century-old historic building in Lachine will soon be transformed.  In the coming weeks, construction work will begin to convert the Royal Alexandra Theatre, on Notre-Dame Street, into a commercial-residential complex.

The Lachine Borough Council gave the green light to Montreal developer Universel Holdings. The total value of the project has not been disclosed.

« The look of the building will not change much. There will be some new windows on the side.  We will sandblast the bricks and freshen up the look.  The Royal Alexandra sign at the top will not move, » says Nezz Soghraty, president of Universel Holdings.

The plan calls for the creation of 12 condominium units.  They will range from 800 square foot two bedroom units to much larger 2000 square foot homes.   The ground floor will be occupied by a business.  Lachine mayor Maja Vodanovic thinks it would be an ideal location for an art gallery or a coffee shop.

Vodanovic is excited by the project.  She says it will help give new life to the « former jewel of the borough ».

« The entrance will be more beautiful than it is now.  It will be all glass. I can’t wait, » she says.

For many decades, the Royal Alexandra Theatre was a popular gathering spot for Lachine residents and Montrealers. It opened for business back in 1918.

A few years ago, the venue’s vocation changed.  It was rented out to entertainment promoters who used it to hold dance parties and wrestling matches. It’s currently closed.

The neighbourhood is also undergoing a transformation.  A number of businesses are slated to open in the coming months including L’Oeufrier, Falafel Saint-Jacques and Librarie Verdun.

Entrepreneurs obtained loans and subsidies thanks to two economic development programs: PR@M-Commerce, which is operated by the City of Montreal and Renouveau Notre-Dame, administrated by PME Montréal-West Island.

According to Soghraty, units at the Royal Alexandra will likely go on sale in May or June.  He expects the project will take between eight to twelve months to complete.  If all goes as planned, families will begin moving in late 2019.